One of the most shamelessly despicable episodes in the referendum campaign occurred in the final couple of weeks when Better Together activists were going around knocking on pensioners’ doors telling them that they would lose their pension if they voted Yes. British Labour and their Tory allies took great pride in this contemptible tactic and credited it with having played a significant part in securing a No vote.
The ploy was devised by the disreputable characters who ran Project Fear. Those same disreputable characters are now on the payroll of British Labour in Scotland. And they are still up to the same dirty tricks.
Pensioners across Scotland are complaining about a letter (above left) they have received from British Labour branch manager in North Britain, Jim Murphy. And no wonder! It is the most appalling litany of scaremongering, misinformation, distortion and downright dishonesty imaginable. A document that reeks of Murphy’s fear and desperation as he faces richly deserved humiliation at the hands of Scotland’s electorate.
The letter starts with the claim that Nicola Sturgeon had “confirmed that the SNP’s key General Election pledge is to cut Scotland off from taxes raised across the UK.” This is a reference to full fiscal autonomy (FFA) which, far from being a “key pledge” is little more than a footnote in the SNP manifesto. Lie number one!
And it is not a “pledge” at all. For the simple reason that SNP MPs at Westminster have no means to deliver FFA. A fact that mendacious Murphy is every bit as aware of as Nicola Sturgeon. The most that can be said about FFA is that the SNP favours such an arrangement. But Murphy knows full well that it isn’t going to happen. Lie number two!
The reason that FFA isn’t going to happen is that, despite their infamous “vow” to deliver precisely that in the panicky final days of the referendum campaign, both British Labour and their Tory allies have now decided to renege on the promises they made to the people of Scotland.
The very thing that Murphy is now shrilly portraying as being disastrous for Scotland’s pensioners was, only a few months ago, being hailed by British Labour as the ultimate solution to the constitutional issue.
Next, Murphy states that FFA would mean that “we only spend in Scotland what we raise in Scotland”. Which is precisely what happens now. Except that what we raise in Scotland first has to pass through the British Treasury where huge chunks are siphoned off to pay for bloated and corrupt Westminster; infrastructure improvements in London; vanity projects to benefit the south; tax breaks for the rich; bank bail-outs; weapons of mass destruction; and the disastrous foreign military adventures that Murphy is so fond of.
This is Murphy resorting to the tired old caricature of “subsidy junkie Scotland”. A caricature which he and his fellow British nationalists repeatedly disowned during the referendum campaign even as they continued to peddle the “Too wee! Too poor! Too stupid!” line from the other side of their lying mouths.
This insult is followed by a straightforward regurgitation of the lie that British Labour in Scotland were feeding to pensioners last September. The lie that independence/FFA would mean “the end of the UK state pension”. 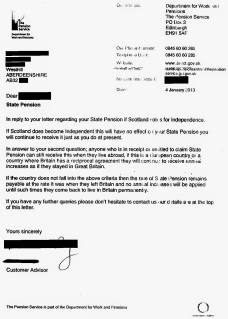 But we know with absolute certainty that even independence would not have put pensions at risk. While Gordon Brown and others were busy trying to intimidate pensioners with scare stories about their pensions stopping the day after a Yes vote, the Department of Work and Pensions (DWP) was sending out letters (right) reassuring people that independence would have no effect on their pension entitlement.
Murphy then repeats the lie about Scotland’s pensions being subsidised by the rest of the UK (rUK) before descending into idiocy with the claim that pensions in Scotland would have to be funded from “plummeting oil revenues”. Here, we get two lies for the price of one. In the first place, oil prices are not “plummeting”. In fact, they have been recovering fairly steadily over recent months.
The second part of this lie is truly idiotic in that Murphy tries to make out that Scottish pensions would be funded from oil revenues rather than from general taxation as at present. Complete nonsense, of course. Nonsense which, yet again, is based on the demeaning idea that Scotland is a poor nation.
The reality is that everything we have in Scotland, including pensions, is 100% funded by tax revenues raised in Scotland. In fact, that’s 100%+. Because in addition to funding our pensions and our public services, Scotland’s taxpayers are obliged to pay what used to be called the “Imperial Premium” – a surcharge imposed to pay for all those “union benefits” listed earlier.
Next up is a reference to the comprehensively discredited Institute for Fiscal Studies (IFS) claims of a £7.6bn deficit as a consequence of the FFA that, remember, isn’t going to happen anyway. So why talk about it other than as an exercise in blatant scaremongering?
The remainder of this malicious missive is taken up with sickeningly dishonest talk of the SNP “scrapping the UK pension”. Murphy genuinely seems to suppose that the people of Scotland are so stupid we can’t figure out that there is absolutely no way that the SNP could “scrap the UK pension”. Even with the maximum 59 MPs, the SNP would be outnumbered ten to one. Those 59 MPs could only “vote to scrap the UK pension” for people in Scotland if such a measure was proposed by a Labour or a Tory UK Government. And no UK Government could propose such a thing because, as we know from the DWP, the state pension is guaranteed. It is a sovereign debt.
Murphy ends with a repetition of the ludicrously dishonest claim that “the SNP have committed to scrapping the UK pension” garnished with a greasily disingenuous comment about the Tories being “determined to continue with their unfair austerity”. As if we weren’t aware that that British Labour is just as wedded to austerity fetishism as their Tory partners in the “Great British Duopoly”.
Murphy and British Labour in Scotland are clearly desperate. But nothing excuses such deceit and dishonesty. The whole of Scotland should condemn this vile strategy of terrorising pensioners. The whole of Scotland should punish the perpetrators on Thursday 7 May. We have an opportunity to rid our land of the liars who blight our politics. Let’s seize it with both hands and send a message that shakes the entire British establishment to its foundations.
The choice is simple. We either vote SNP or we empower lying reprobates such as Jim Murphy.