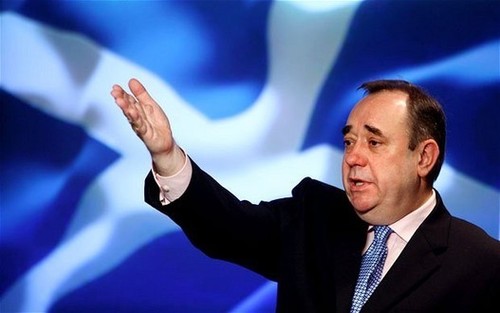 Last September, when it seemed possible that the United Kingdom might be torn asunder, many people wondered why the Scots had become consumed with such bile towards the English. We looked back to the time when the Scots played such a proud part in that “all-British team” that had more impact on the world than any nation in history. Scotland led everyone in shipbuilding, had a major chemical industry and great coalfields. It produced world-class philosophers, scientists, engineers, writers. Scots played a key part in our Armed Forces and in running the greatest empire in the world. Of the 44 presidents of the USA, 17 had Ulster-Scottish blood.

Peter A Bell‘s insight:
No need to read beyond the first sentence. Anybody who seriously imagines that Scotland’s modern, progressive civic nationalist movement is driven by “bile towards the English” really hasn’t a clue what is going on in Scotland.

Brooker’s problem is that he is a British nationalist. British nationalism is characterised by notions of British exceptionalism and an unfounded sense of innate superiority buttressed by contempt for anything that is not “British” which all too frequently goes beyond merely bordering on xenophobia.

British nationalists.tend to be a mindless bunch. Theirs is a faith position. They have never questioned the divinely ordained British state. They regard it as part of the natural order. It wouldn’t ever occur to them to question it. They are not equipped to do so.

Because the only nationalism they know is one which creates and hates otherness, British nationalists assume that all other nationalism are the same. They genuinely cannot conceive of a pragmatic nationalism which has little or nothing to do with identity and patriotism.

Booker wants Scotland’s independence movement to be characterised by contempt and disdain because this is all he understands. It is the only way he can deal with a constitutional challenge to the old order and the old ways. It simply is not open to the British nationalist fanatic to ask whether there might be some rational reason why so many people reject the structures of power and privilege with which he is comfortably familiar. He exemplifies the British establishment at its hyper-defensive worst.