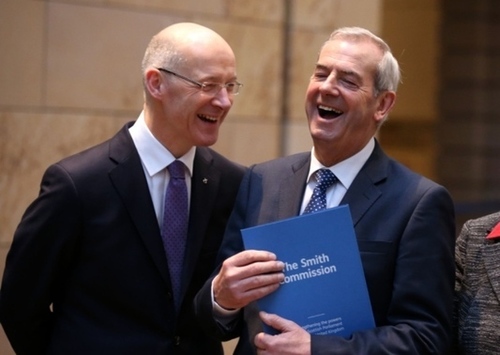 Brian Wilson is, as I’m sure everyone knows, well out there on the deranged and deluded fringe of British nationalist fanaticism. So it is only to be expected that his rantings on the subject of the Smith Commission’s report and the response from those who are not so mindlessly devoted to the British state would have little to do with reality. While Wilson predictably rails against the SNP in characteristically bitter, bilious fashion, the herd of elephants in the room which his inane prejudice prevents him from seeing is the fact that Smith’s proposals don’t just fail to address – far less meet – the aspirations of the SNP and the wider independence movement, they don’t even come close to matching what was promised by the British parties and so comically “guaranteed” by Wilson’s fellow British nationalist, Gordon Brown.

Brian Wilson is right about one thing. The SNP was always going to be critical of whatever was offered in this latest round of futile constitutional tinkering. Just as British Labour in Scotland was always going to whine about the SNP’s “attitude”. The difference lies in the fact that the SNP are absolutely, factually, objectively correct and fully justified in pointing out the deficiencies and inadequacies of the Smith Commission’s final report. Wilson and his bleating, carping ilk, by contrast have no such justification. Apart from stating the obvious regarding the Smith Commission’s failure to deliver, the SNP is, after all, doing no more than remaining true to its core policy position of independence or, in the interim, the maximum powers that can be gained for the Scottish Parliament short of independence.

If Wilson and his British nationalist cronies don’t like being accused of betrayal, then perhaps they should make different choices.